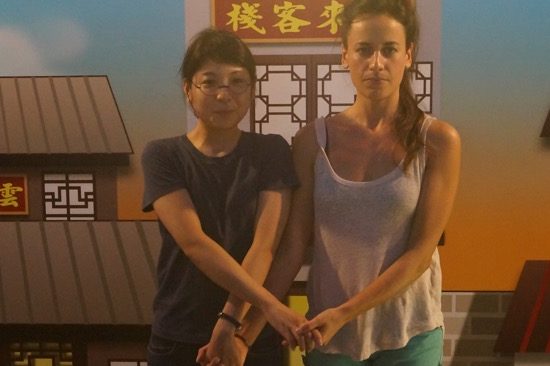 How to Disappear (nearly completely)
by Mayumi Arai & Nina Willimann

A series of experiments around the process of disappearing – physically or metaphorically, temporarily and at least partially

“In Chinese tradition (…), matters concerning the psyche and attainment of deeper insight are approached via the body, not via the cognitive reflection.” (Jörg Huber)

The basic idea of the Chinese martial Art T’ai chi ch’uan (or Tai Chi) is linked to the philosophical principle that, if one uses hardness to resist violent force, then both sides are certainly to be injured. Instead, students are taught not to directly fight or resist an incoming force, but to meet it in softness and follow its motion while remaining in physical contact until the incoming force of attack exhausts itself or can be redirected.
Being both strangers in Hong Kong and Tai Chi beginners, we take this basic idea as our base for the development of a series of practices in order of trying to integrate, to become part of, to gradually disappear in a foreign environment. Each of us is proposing experiments which we will try to realize together. We understand this act of realisation as a performance and at the same time as reflection and research which will lead us to further experiments.

Practice 3: Integration
How to become chinese