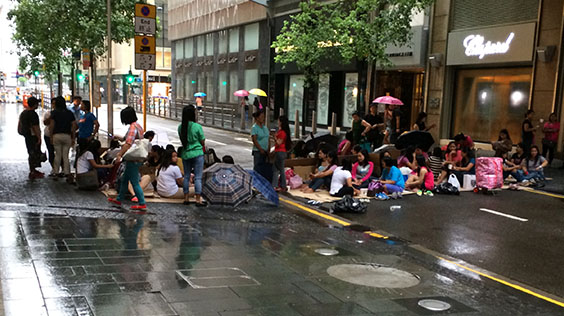 Many in Hong Kong have identified the city as “half-sovereign” or “conditionally sovereign,” as the times of post-1997 have brought about new ruptures and shifting boundaries of citizenship in economic, cultural, and legal terms.  The work of deciphering questions of belonging and multicultural existence is still ongoing, and has in fact intensified in recent times.  Increasingly, who qualifies as a citizen and where their sense of home is have become vital questions for two visible groups: the Chinese Mainlanders whose personal and cultural fortunes have been transformed by opportunities presented by the permeability of the city-border, and the foreign domestic helpers whose right of belonging has been caught in the discrimination of immigration laws.

Prof Erni invites participants to join in conversation to consider a notion he posits: that people’s fates are conjoined by a state of “included-out” – something augmented by nebulous doctrines of citizenship rights as well as by legalized and informal forms of cultural racialism.

John Nguyet Erni is Chair Professor in Humanities and Head of the Department of Humanities & Creative Writing at Hong Kong Baptist University.  Erni has published widely on international and Asia-based cultural studies, human rights legal criticism, Chinese consumption of transnational culture, gender and sexuality in media culture, youth consumption culture in Hong Kong and Asia, and critical public health.  He was a recipient of the Rockefeller and Annenberg research fellowships.  He is also an elected Fellow and Member of the Executive of the Hong Kong Academy of the Humanities.   He is the author or editor of 9 books, most recently (In)visible Colors: Images of Non-Chinese in Hong Kong Cinema – A Filmography, 1970s – 2010s (with Louis Ho, Cinezin Press, 2016); Visuality, Emotions, and Minority Culture (forthcoming in 2016, Springer); Understanding South Asian Minorities in Hong Kong (with Lisa Leung, HKUP, 2014).