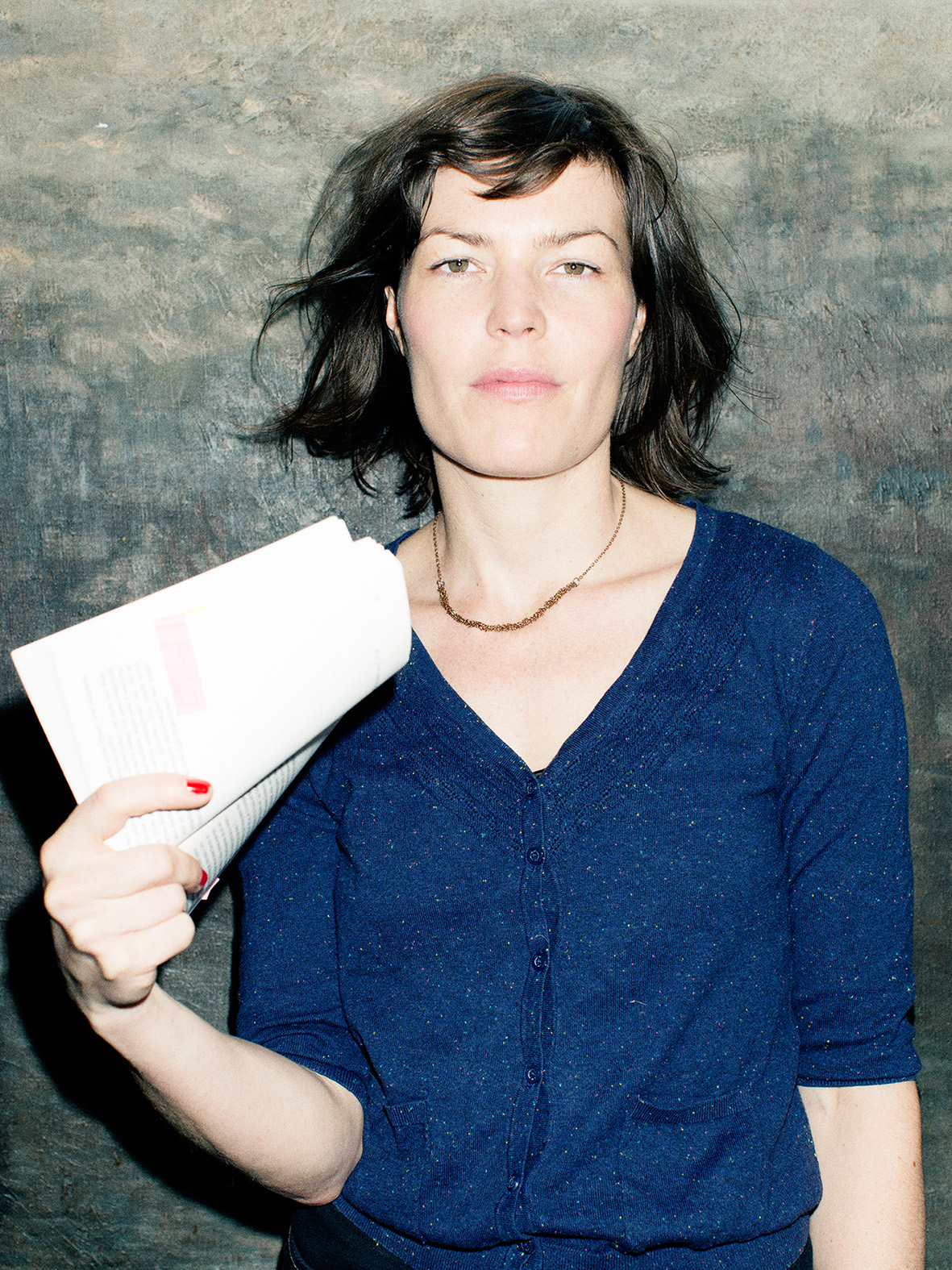 A conversation on the art of collaborating, subverting power structures and telling people what to do.

Lucie Tuma: To answer the latter: yes. It is an interesting thing to think about this artist identity. I remember one conversation with a friend from Japan, which does not really matter, but maybe it does: We agreed that it is more about becoming an artist. It assumes that identity is nothing that is fixed or something that is done at some point. It is not a fixed structure. It is a process. On the other hand, I do believe in talent and I do believe in soul. To think of something that is out of time is very interesting to me. But to come back to the question: the first moment or piece I made that made me think of myself as an artist was the time I finished art school. Before that I also did a lot of works, even as a kid, but as soon as I entered the context of art making and selling I probably thought of myself as an artist. As soon as I had an audience detached from the student body, so to speak.

Mathis Neuhaus: What are the main ideas or topics in your artistic practice?

Lucie Tuma: I have always been interested in metaphysics and magic – things that change our perception of time. As my media is dance and as I also work as a choreographer, the focus will always be on how to change perception of time by modulating it. This is a very broad subject and another one, that is as broad, is structures of power. That occurs maybe not so much in the topics I deal with, but more in the ways I work. But that consequently makes it obviously also part of the piece – the way I work. There is an interest in ethics, a feminist-marxist tradition to look at how you deal with the things you produce.

Mathis Neuhaus: Does the place you are based in influence your work?

Lucie Tuma: For sure. There were choices in my life where I changed places according to that.

Mathis Neuhaus: How do you approach new projects? Do you work with a concrete question first and develop your piece from there? Or is it vaguer in the beginning? Are there routines?

Lucie Tuma: I always wonder where it comes from and I try to challenge this place of origin. Often it will be something like an intuition or an alien obsession which comes, I could go that far, as a dream. There can be something extremely concrete in intuition. Where I will not be able to articulate the new thing or idea, until I start working. So, I wouldn’t say it is vague. It can’t really be, because I work in the realm of aesthetics that differs, for example, from the realm of notions and terminology. There is another formula of precision and it shows itself differently. It’s a visceral and material based approach towards the world, though notions can be material too, and an important one. There is a routine of having notions and terminologies – theory so to speak – affect and interfere with the work.

Mathis Neuhaus: I have seen the term “ecology” popping up in regards to your practice, too?

Lucie Tuma: I started to use the term and call part of what I am doing ecologies in 2010 or 2011. Because it takes into account that I am not only collaborating with people, but shift towards materials that are non-human. This kind of ethics helps to propose another way of working, because I have to listen to many other things in my perception and in the way I understand myself and others.

Mathis Neuhaus: Let us focus a bit on the aspect on collaboration: what do you think are the advantages or disadvantages of collaborating in artistic practice?

Lucie Tuma: To be honest, I do not mind telling people what to do. I have chosen and created very specific situations, where this is exactly the point. When I invite people into a setup, I have to tell them what it is and what to do. For some works, I choose this hierarchical approach. Because sometimes, that is how a work will be set to operate and function best. This leads to a certain liberation also. Because people are invited and they know what they are dealing with in a set structure. It is important to be aware of that and make it visible, especially in dance and theatre. These disciplines work in the tradition or ideology of flat hierarchies and often argument from the standpoint of a collective. They say so, but in most cases, it does not happen. Power always manages to sneak in through the backdoor. In the end, it is the guy with the biggest cock or the loudest mouth who says what it is going to be. Even though it doesn’t have to be the figure of the straight white male, and these power structures get reproduced by people identified as women, queer, whomever. I am happy to look for other proposals like the duo-practice as Chuck Morris, where it is quite clear that it works differently. That everything is produced in this twosome, as a disintegration of artistic identities.

Mathis Neuhaus: It is about challenging conventions?

Lucie Tuma: Yes. And power can be distributed equally even though you are taking on a so-called hierarchical positioning. It may be not so popular at first sight, because you are reproducing these conventions, but I think my generation is already grown tired of flat hierarchies. I have seen so many examples of collective collaborations that went completely the wrong way. It is silly to think you can say: let’s just all be equal. Because we are often not, at least we are definitely not all on the same page with privilege. And of course, we are not the same. We can all do different things, have different capacities. Rhetoric wins, knowledge wins, age wins – something like privilege wins. And to challenge exactly these things, you have to be smarter. And that is what I am interested in: challenge the existing ways.

Mathis Neuhaus: Chuck Morris, the duo-practice of yours, is attempting to dissolve artistic identity. So, authorship is not important anymore? It is an entity that speaks?

Lucie Tuma: In everything I do it is about challenging the ways of thinking about authorship. Heiner Müller said: “The work is always smarter than the author.” That quote was very important for me. To stress this, I try to serve the artwork, not the other way around. I cannot colonize it with my taste and opinions. I try to step back as a person and I think it is interesting to cultivate a distinction between a person and an artist. Not only in division of personal and professional life, but in trying to dissolve subjectivity or identity. I do not have a problem with authorship, but I think it is overrated.

Mathis Neuhaus: Is it by chance that you are two persons in Chuck Morris?

Lucie Tuma: No, it is symmetrical of course – and it has to be. We always have more people involved though. Chuck is an artificial artist figure. We call it a twin-figure, too. So, it has to be two persons. But around it, it has an ecology.

Mathis Neuhaus: How did you find together for it? The setup is for 50 years, that is a rather big commitment.

Lucie Tuma: Yes, but that makes it also easy to let it rest for a while. Right now, it is not that present in my life. From the beginning on it was important for us to take it slow and to not forget our own practice. It is like a marriage. It has more exciting and less exciting times, or times where we are closer and times where we are not. It is very interesting to observe ourselves over this long period of time, because when we decided that this project is going to last 50 years, it really took on a life on its own. It is very helpful.

Lucie Tuma: In dance or theatre, the ways of working are rhythmed in such a way that you cannot really commit to anything. People get together in new constellations all the time, you are moving a lot, from residency to residency to production, people are constantly on endorphins and adrenaline, in a reactive mode of overexhaustion, and relating becomes a bit interchangeable. It is the way of post-Fordism: moving a lot and remaining flexible. It is the standardized way of working in dance and theatre nowadays. And we tried to find another way of producing work. From a short-term romance to the opposite. And we wanted to own our means. We did not want to follow the demands that were put on us, doing five premieres a year. It’s impossible to break out completely from this aforementioned frame, and one is part of it one way or another, but I find it important to insist on having a standing point in negotiating the positioning within this frame and to take it as a given – owning one’s means, as far as that is ever possible at all, and finding strategies to not solely react or comment on existing things, but actually pro-duce.

Lucie Tuma works and cooperates with Gessneralle Zurich and other theatres and festivals in Germany, Scandinavia, France, Austria and Switzerland. Depending on the desired outcome, she makes use of a broad range of media. She is active as an artist, director, choreographer and performer. In 2008, she founded the duo Chuck Morris together with Cecilie Ullerup Schmidt, who she had met at the Institute of Applied Theatre Science in Giessen University. The double body is both a long-term relationship within the time frame of the next 40 years and a structure attempting the dissolvement of individual artistic identity