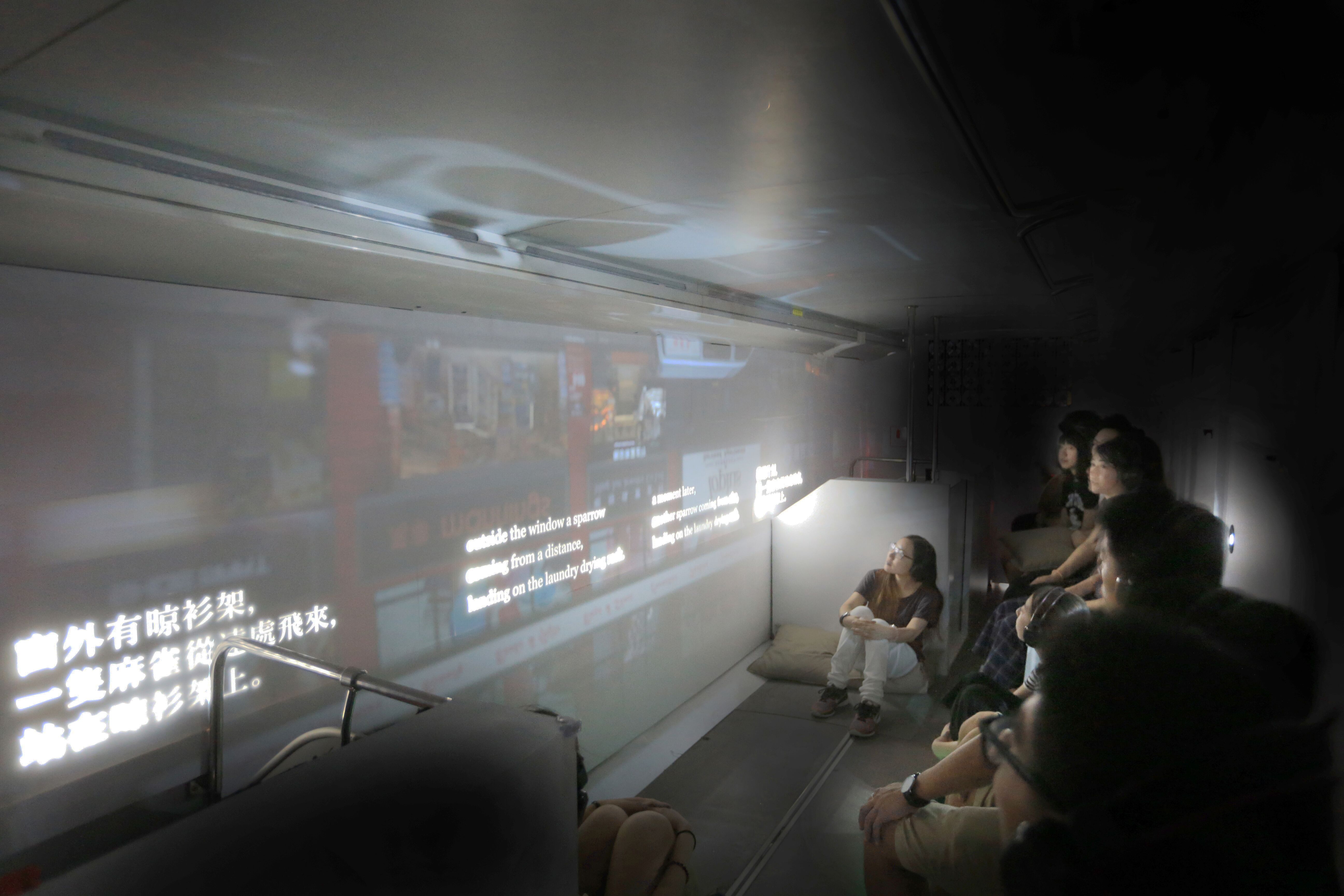 A conversation on art as mediation, the creative potential of failure and Hong Kong as an artistic playgroundMathis Neuhaus: From what point on did you consider yourself an artist?

Kingsley Ng: For me, the term “artist” can be problematic sometimes. I would rather call myself an “art practitioner.” The word “artist” has so much historical baggage. I personally do not really like these terminologies and definitions, or such labeling. Therefore, I would not say that there was a time when I identified myself as an artist. I got into this, because I was, as an art nerd, interested in the potential of the arts, as opposed to someone who defines him or herself as an artist by default.

Mathis Neuaus: What are the main ideas that you are interested in in your artistic work?

Kingsley Ng: Some people would say I am a media artist. But I do not want to look at media art in its traditional definition of making video, for example. I see media art more as the examination of how to construct mediation. Mediation between things, between places and people or various stakeholders of a particular context and project. So, one aspect is mediation. Another one comes from a metaphor that resonates with me quite a lot: it is about the finger and the moon, taken from a Buddhist text. There is even a Bruce Lee movie that refers to this metaphor. In the film, Bruce Lee was using his finger to point to the moon, but someone who is, in the Buddhist way of speaking, a bit more foolish, may only see the finger and not the finger making a connection to the moon. In my work, I often try to construct situations like this that help to show where the moon could be. When I create my works, I am very conscious about the fact that the work itself may not be the meaning, but the mediation.

Mathis Neuhaus: In your works, you are inherently thinking about mediation. What role does collaboration – a term closely connected to mediation –  play in your artistic practice?

Kingsley Ng: There are two levels. If the work itself is a mediation, it involves a much wider scope in comparison to a work that is self-contained. Often, only with an audience or participants the work is completed and therefore they become a part of the work itself, which, on that level, certainly makes an argument for the importance of collaboration in my work’s meaning. At another level, in a practical sense I am used to working more like a theater or film production, which means we have a lighting designer, someone who does the programming, stage managers and people handling the logistics. So, it is quite natural for me to collaborate. I think, in the visual or contemporary arts this approach is a little bit fresher. It is certainly not new. In theater or film this was always the case, but in the visual arts you had the “geniuses” that did everything on their own. My practice is always collaborative and my role is maybe being the synthesizer of different talents, bringing them together and by doing so creating a new work.

Mathis Neuhaus: When working with different people, how do you cope with failure? If more agents are involved, it is always a negotiation which makes failure possible. Is this term something you consider or allow?

Kinglsey Ng: This really depends on what the definition of failure is. Under the scrutiny of different levels of objectives, I always fail. For every single work, there are aspects that may not work. But for every single work there are also aspects that are worthwhile under certain objectives. For me, it is not a binary situation of failing or succeeding. It is natural that things sometimes do not go as intended. There is never a work that is completely under control, because it is never completely controllable. It is about letting things happen.

Mathis Neuhaus: There is also creative potential in the possibility of failure.

Kingsley Ng: Things like chaos, or more elaborately, serendipity come certainly into play. There is a creative potential in failure for sure, but there are also moments that when it fails, it just fails.

Mathis Neuhaus: The semester topic of this year’s Transcultural Collaboration is “Ecologies” – how do you think about ecologies as a fitting topic for a program like this?

Kingsley Ng: One of discussions we had while thinking about the semester topic was the wish for integrating a clearer research dimension into the projects and also propose artistic research on a certain topic as an adequate practice for finding out things. Under that premise, it is interesting to consider art as a strategy to look at an ecosystem of a particular place and try to make things visible that are otherwise not necessarily put into consideration. One trajectory is what kind of potential lies in the arts as a method to study, as opposed to a more sociological approach, for example. As a reference point, we were, amongst other things, looking at people in the United Kingdom, that were using music to track the traffic patterns of a city. In using sound and music as a method, they were able to resurface certain patterns which are not that easy to see when using data, numbers, charts or graphics. By adapting these strategies, it is possible to add another layer of meaning to a particular subject.

Mathis Neuhaus: What is the connection to Hong Kong?

Kingsley Ng: Ecology is obviously a very open concept. And if certain groups wish to focus on Hong Kong, that is possible, but it can be much wider, too. Also, if we are looking at the notion of transculturality, it can be about how different cultures interplay or something completely different that may be more abstract. But since the program is set in Hong Kong, there are so many things that one can react to and examine.

Mathis Neuhaus: Where do you think lies the artistic appeal of Hong Kong? Does the city affect your work? I know about the Camera Obscura you built in one of the historic trams.

Kingsley Ng: The camera obscura reacts to the city of Hong Kong, which is a city of artificial lights, by trying to not add any more light, but using what’s there. Opening up a small hole and letting in the light from outside, allowing it to emerge. So, in a way it was about finding strategies to counter-balance all this light and imageries, and how we can strive for more contemplating experiences in the heart of the big city. For me, this is something that is very necessary in a city like Hong Kong. How to construct urban sanctuaries.

Mathis Neuhaus: The last question is connected to the program, but also your own biography. You are born in Hong Kong, but grew up in Toronto and studied in the United Kingdom. Do you reflect on this dialectic of East and West?

Kingsley Ng: Often, the emphasis is in on the differences and not necessarily examining the commonalities. From my experience, people tend to do this, by referring to different appearances, backgrounds or whatever, but in fact, and in the context of today’s socio-economic settings, people are more polarized and rooted in different cultures, religions and upbringings. It may sound naïve, but one aspect of art is how we are able to look at the commonalities of humanities. For me, this is very important. I am sure, that if you travel enough, you will experience discrimination and people can be very judgmental, based on stereotypes or ignorance. I value a lot that the arts have this ability, some people call if soft-power, of mediating things that are sometimes not a possibility in reality, because of politics or different agendas.

Kingsley Ng (b. 1980) lives and works in Hong Kong. He is an interdisciplinary artist with a focus on conceptual, site-specific, participatory and process-based projects. He often works with the ephemeral and intangible, such as light, sound, space and time. Light is often used not only as a medium but also as a metaphor for art making—to cast light on the imperceptible, hidden or forgotten. Ng’s work has been featured in international institutions and exhibitions, such as Contemporary Art Centre South Australia (2016), Museum of Contemporary Art of Rome (2014), Guangzhou Triennial (2012), Land Art Biennial Mongolia (2012), Echigo Tsumari Triennial Japan (2009), and IRCAM—Centre Pompidou in France (2006). He is the recipient of the Hong Kong Arts Development Council Best Artist Award in Media Arts 2014, Asian Cultural Council Fellowship 2013, and Hong Kong Contemporary Art Biennial Award 2009. Ng received postgraduate training at Le Fresnoy—National Studio of Contemporary Arts in France under the tutelage of Alain Fleischer, Andrea Cera, Atau Tanaka and Gary Hill and graduated les felicitation du jury à l’unanimité. He also holds a MSc in Sustainable Design from the University of Edinburgh, and a BFA New Media Art degree from Ryerson University in Toronto. He is currently assistant professor at the Academy of Visual Arts, Hong Kong Baptist University.