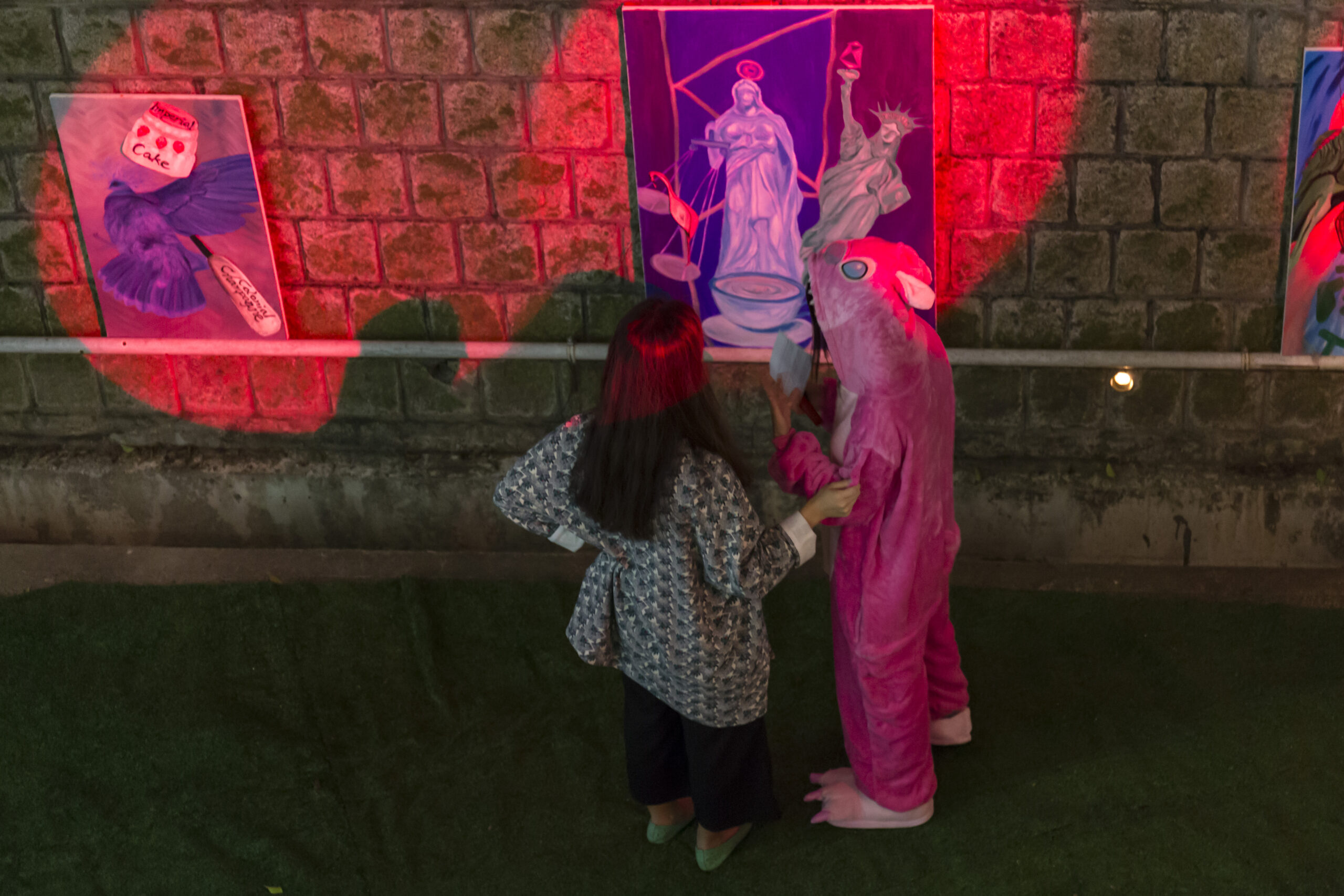 The final work is a combined multi-media work involving four elements that explores the experience of the park.

The grass lawn installation represents a fake experience of the Kowloon Park, which is largely made up of concrete, rather than lawn.

All four performers are dressed as animals/ special characters in the duration of the presentation.

A time-lapse video “The Birth of Decay” exploring the Sunday social gathering of ethnic minorities (mainly domestic workers but also other minority immigrant and refugee/ asylum seeker groups) and food sharing near the water fountain in the Kowloon Park.

Food sharing also means cultural sharing. We have collected different kinds of food from Malaysian, Filipino, Indonesian, African, Hong Kong and Chinese people. Most of foods are typical of their own countries. There are also some foods not related to their nations, e.g. an African friend would like to share Italian food to us.

After collecting the food, we combined them with chopsticks, forks and scoops. Under the influence of the air, temperature, wetness and other specific conditions of Hongkong, the food influenced each other and decayed together until to the end, when new lives were born out of them.

The video recorded the process of stiring and blending these foos and a slow decay of them. In the final show night, we also had an installation of the decayed food and a live stream video of its continuous decays is also set up at the back.

The park experience at the venue includes the cooking and sharing of food, including a tea vegetable rice noodle speciality in Guangdong and some cheesecake, the performance of spiritual rituals (the mandala) and light background spiritual/ religious music.

The sharing is continuous throughout the duration of the presentation and creates a point of interaction between the visitors to the installation and us.

This emphasises the generosity and sociality of sharing as experienced in the park and the ritualistic nature of food sharing. Audio of stories on the grass

These stories collected through contacts (such as a HK local, an Indonesian woman, a refugee) made in and around the park as well as outside of the park and HK (e.g. a Singaporean) involves six different “fake”, partly made-up, mix-and-match identities.

These audios are placed on the fake grass lawn and could only be heard when one comes close to it, but the sound diminishes when visitors walk away.

They create the experience of amalgam encounters with various people of different nationalities, cultures in the park and a sense of mismatches in global interaction.

Paintings on the wall with candles

Three surrealist paintings set in different parts of the park (the ex-colonial Heritage Museum, the Sculpture Garden and Flamingo Pond, and the Caged Aviary and the Maze) are placed on a long brick wall decorated with candles.

The paintings focuses on the birds observed in and around parks in HK explore the dialectics of freedom and control as experienced in the Kowloon Park as a microcosm of HK.

One-to-one or small group conversations on or around the paintings and Hong Kong’s post-colonial and current political situation are performed as the visitors approach the wall. The scene on the final presentation night in Kaitak