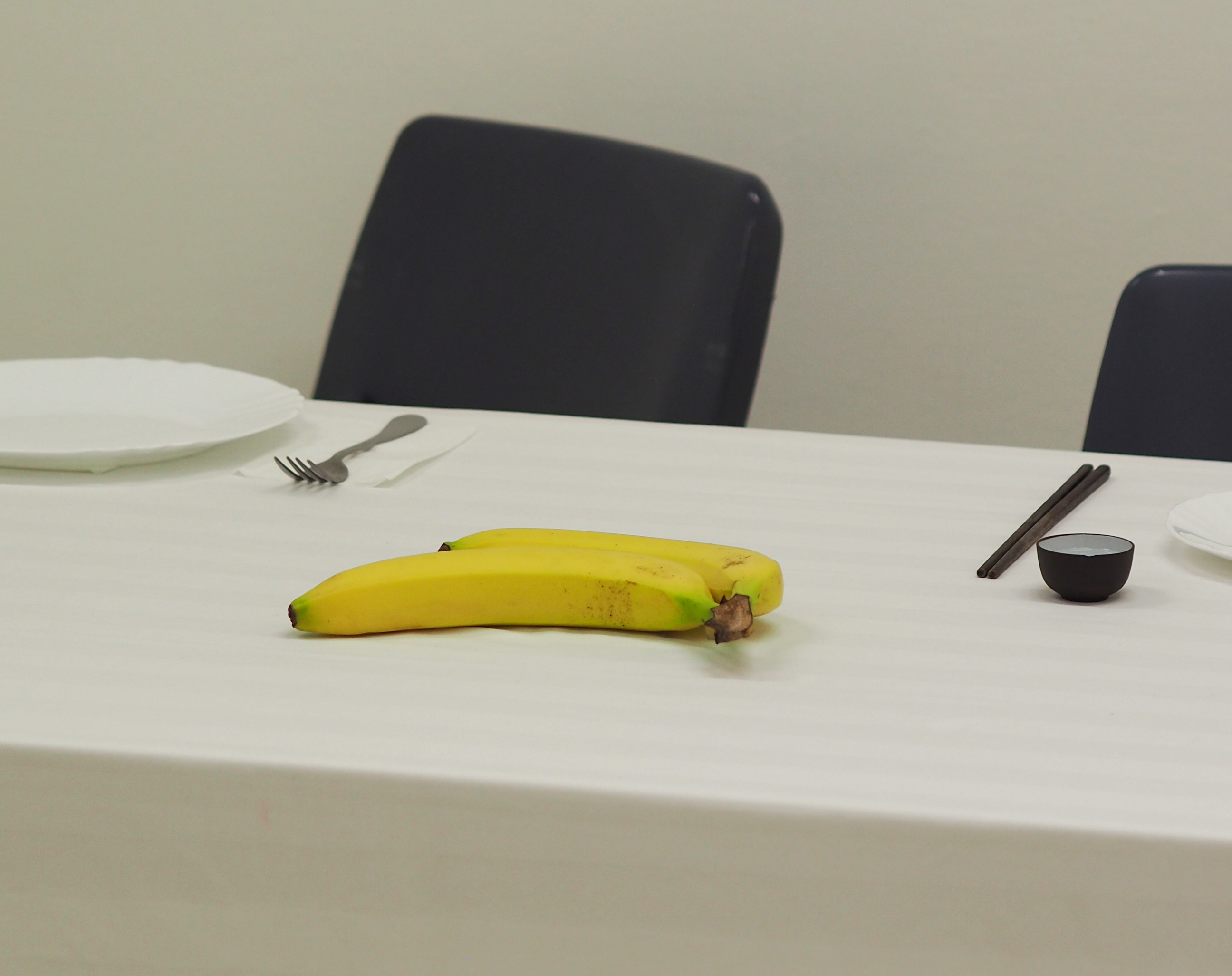 What does freedom mean? Is it being free?
What rules, ideals and structures are taught by state, parents and society without us being aware of them?
Where does the metamorphosis of structure and habit begin?
In the performance Error 404 Fu Lingbo and Gloria Hertig transfer their learned impairment into a common meal. We transferred the learned impairment into a common meal. We used table manners as a metaphor for social structures. Table manners are different in every culture and we learned them as children eating with adults. So we not only apply our table manners in fancy restaurants but they unconsciously become natural movements.

The setting of the performance was as follows: Two people eating at a table, facing the audience, not staring at them but eating in front of them. The whole scene is plain and kept in discreet colors, everything is white and clean. Next to the table there are two floor lamps, the lampshade taken down, seeing only the bulb. The whole set has been kept very minimalistic so that the audience can pay attention to the details.

We try to bring our different cultural aspects into the performance. The plates have different sizes. Fu Lingbo eats with chopsticks, Gloria with fork, knife and a spoon. She won’t use the spoon to bring the sign of freedom, the will to decide not to use it, into the performance. The glasses are both filled with water but Fu Lingbo will wash his chopstick in his glass and drink tea from the tea cup. Both actors eat a banana, which stands for globalization and as a fruit that is available all over the world and known to being eaten with hands immediately.

The topic of rules and restrictions fascinated us in a transcultural context, because rules and caution signs can be found everywhere and in great number in public spaces in Hong Kong. We connected this aspect to the performance by sticking  signs and rules everywhere in the exhibition halls to hint at the fact how guided the society of Hong Kong is.

The group formation was very exhausting. We were separated from a big group, coming together as  a team of two. Because of the fact that we had previously dealt with the topic of surveillance, we noticed the many prohibition signs around the city. We found many are useless and simply funny.

Because we were only two, we talked a lot about our lives, future plans and wishes and of course about education and up bringing. Quickly, we realized that we are not as different as one might think. To show the cultural differences, but also to question the idea of freedom and restriction, which is present for Swiss as well as for chinese people. We started discussing about eating and manners and it soon became clear that manners are the perfect form of expression for this topic. We were able to break down the subject but still bring the strength and the message through.

As we talked a lot about different life questions and life in general, the topic came naturally to us. Working together as a group was very easy. Since we were only two, we did not have big and long discussions. Though the language barrier wasn’t easy to handle and we sometimes got lost in two-hour discussions after which we realized we weren’t talking about the same thing.