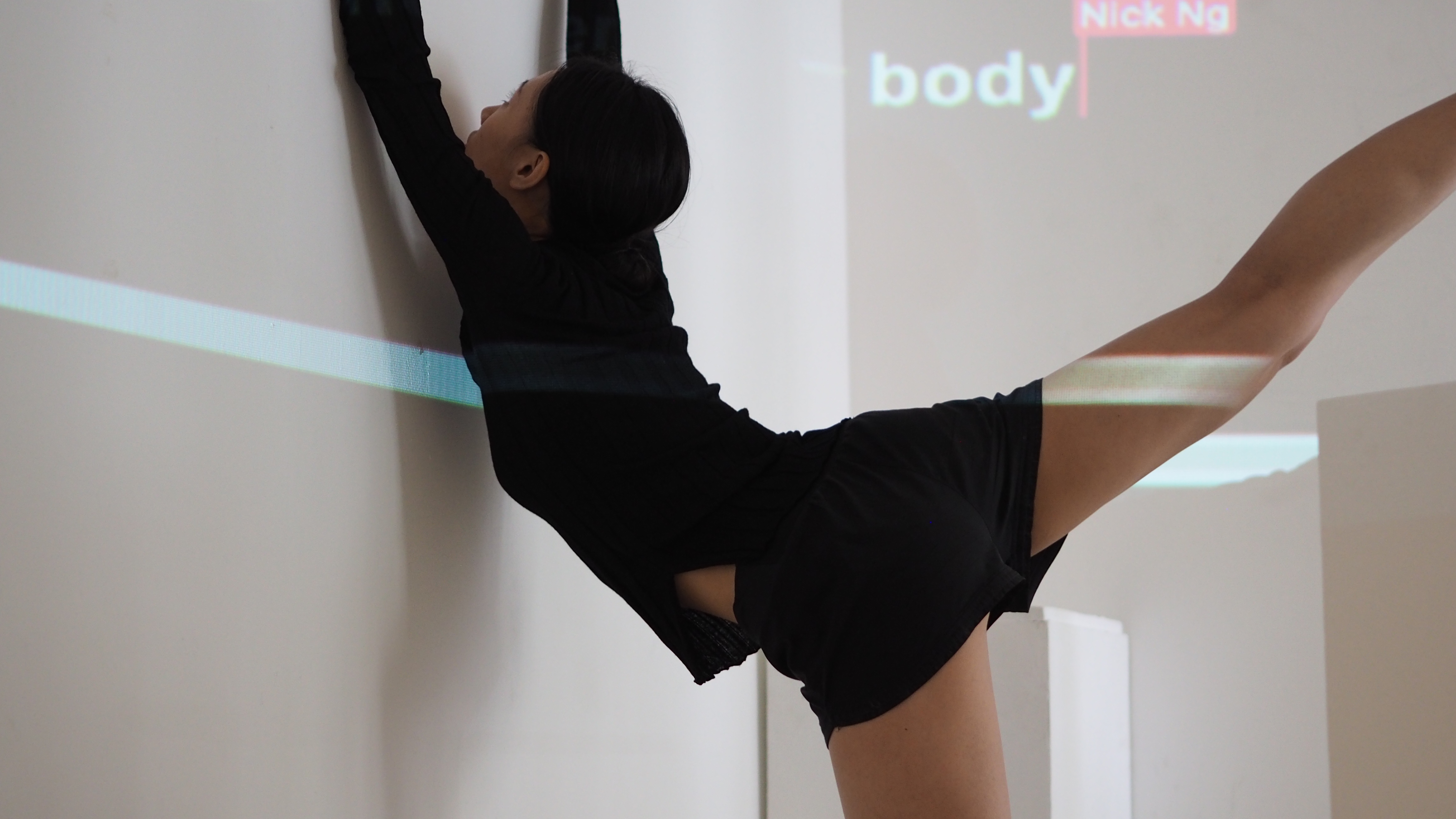 A performance by Jia Yu Wu (Performance, Xinghai Conservatory of Music) and Nick Ng (Theatre, Lasalle College of the Arts).

In this age of news and fake news, Yuyu and Nick seek to find commonality and conflict. Leave or not to Leave is a performance showing different levels of translation of what we see and not see, how we respond or not respond.

The performance consists of 2 performers. One who is seen, heard and felt physically. The another not seen in physical form, with his presence felt merely in text.

Yuyu’s dance performance is performed by Nick through text in an un-emotional, purely descriptive way, While Yuyu responds physically against the factual interpretation.

The performance’s inspiration came from events happening in Hong Kong, raising the question of perspective, how people translate news and information. The media we are working on involves physical performance and projection of text via live streaming.

We started with discussions on our interest in the topic. We soon realized that we were both interested in the events that were happening in Hong Kong. However, our perspectives deferred. Yu being interested in the concept of conflict and Nick’s interest lies in the relationship between human collective and land/environment.

We’ve gone through a process of finding out our differences in search of conflict. We first took pictures of our environment and engaged in a serious of discussions into what we saw in the pictures. We derived at various points of difference in perspectives. Examples of differences are colours, differences in terms of interest and people of age and gender.

With that Nick proposed to extend the discussion from pictorial into physical improvisation. Yu was asked to do an improvisation with an object of choice for a duration of about 5-10mins and both Yu and Nick will write down their response to it. The attempt was to find differences and conflict based on looking at a performance, between the thoughts and physical/emotional experience of the performer and the experience of the viewer.

Yu’s response was a highly emotional response consisting of just 4 chinese characters, while Nick’s response was a whole passage of text(in English) describing in detail the performance of Yu, in an unemotional way. This highly provoked Yu, making her very uncomfortable in the way her performance was perceived. We realized we have found our point of conflict and decided to use the text as a basis to work on the presentation.

As we were a group consist of Jiayu, currently in Hong Kong and Nick in Singapore, the processes were a series of text, voice and video conversation, utilizing platforms such at Whatsapp, Wechat, Onenote and google docs.

Challenges include transmission of data and trying to understand each other’s point of views via internet connection. There is a lot that is lost in translation due to the non-physical (not being physically present) form of communication. Instances in which bad quality of voice or video is at play. We also have issues of time, as nick is still attending class in school in Singapore, finding a time to meet becomes relatively challenging.