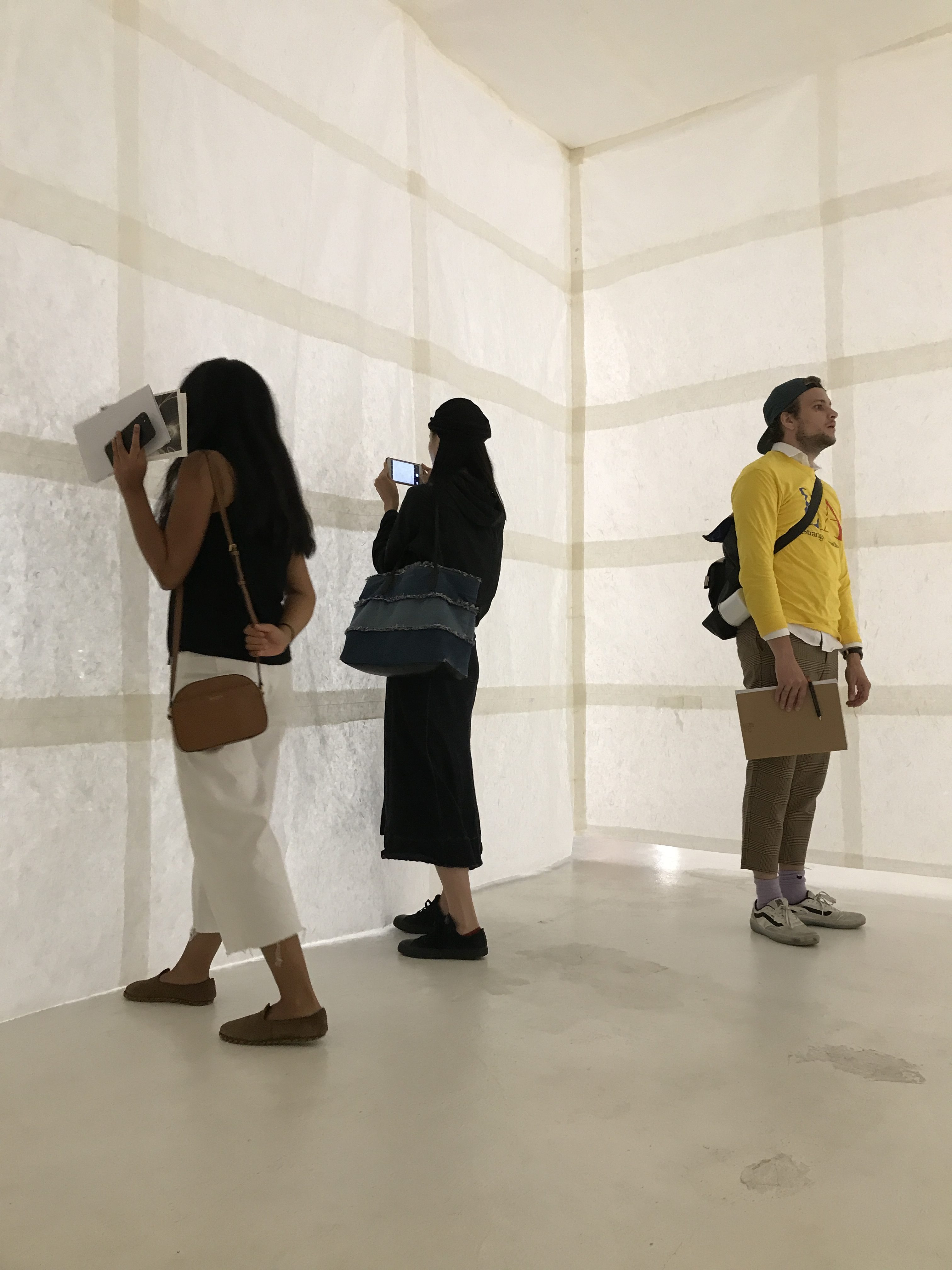 Working collaboratively can be inspiring and challenging at the same time. ‘In Process’ is a series of small reports following along each group for a day to find out how they interact and work collaboratively, what difficulties they might face and what strategies they follow. The insights offer a snippet from different stages on the way to their exhibition/performance at Ming Contemporary Art Museum Shanghai on November 8th.
In the very early days of their project, I met Cindy I-Hsin Cheng, Jia Yu Wu, Timo Raddatz and Raúl Castro Estévez on a research day hopping from gallery to gallery.

I meet Cindy, Timo, Raul and Yuyu at noon outside a multi-story building in Central. They have visited 7 galleries in the morning already. Everyone is very hungry, so Raul leads the way across the broad street, passed the tram way. We leave Chater Road, home to many luxury brand flagship stores, and walk through a back street. The concrete ground is wet, AC’s are dripping onto our heads as we pass through the tunnel-like and smelly alley. We exit on the other side and the scenery changes. No more shiny stores with big windows but crammed shops and street food booths fill the now narrow and steep streets. Together, they choose to sit down in a typical local Hong Kong restaurant. Yuyu and Cindy, who both speak Mandarin, help the rest of us and translate the menu to English and our veggie wishes to Cantonese. We order noodle soup, curry and milk tea.

It has only been four days since they have formed their group. None of them have worked together before. They found each other because they share the same interest, but eventually stayed together because they all wanted to work with a new set of people. Their broad subject area revolves around history and time, mythology, religion and how one can escape from society in the sense of spirituality. They also like the concept of roots and mushrooms, which are all connected in the underground.

Their group work has been structured from the very beginning: On Monday they started out laying out a schedule for the whole week. Tuesday, they did research individually. Today, Wednesday, is gallery day and tomorrow, they plan to do material research. It was Timo’s suggestion to fix a weekly plan, but everyone agreed on it and they planned it together.

Perhaps, it is not by coincidence, that Timo takes on the role of an initiator. He has experience in theatre pedagogy and has led many productions before. Also, he is used to working in a setting like this. He says, “You can’t do theatre or film alone”, pointing out, that you are always part of a bigger group and it can only work out, if everyone pulls in the same direction. Timo studies Theatre/Dramaturgy and works freelance as a video producer/cutter/director for theatre productions and installations for festivals. He is a person that usually speaks up. But it is very noticeable, that he is aware about how much he contributes to the ongoing discussion about their different working experiences.

It was Yuyu, who raised the question about previous working experiences and creative habits, curious to know more about her group members. She studied Performance at the Xinghai Conservatory of Music in Guangzhou, Mainland China. I got to know her as a very expressive person. Not specifically in a talkative way, but in her body expression. The language barrier sometimes prevents her from following and participating in bigger discussions. She emphasizes, that she is aware of the fact, that she cannot always follow, but she really wants to know and understand about their past projects. She looks at one after the other expectantly, to hear about how they usually work.

After finishing our meals, we leave the restaurant and go back to Chater Road. There is another multistory building with around ten galleries, they are interested to visit: For inspiration, but mainly to get to know each other better and everyone’s approach to the concept and medium of galleries. Afterwards they would share their impressions in order to understand each other’s way of thinking.

Gallery hopping was Cindy’s idea. She had bookmarked some of her interest on a maps app. Cindy studies Fine Arts at Taipei National University of the Arts. She does not talk much, but does so very eloquently, she is a very thoughtful person, a great observer and usually carries a paperback with her to scribble illustrations between the letters. Often times, she hides her mischievous smile behind one hand. When Yuyu asked about her usual work mode, she explained, that at her home university they mainly work individually and not in groups.

Raúl is a clarinet player. He came from Spain to Zurich University of the Arts to study Music Performance. Like Cindy, he too is not used to work in groups like this. Coming from orchestral hierarchies, usually under the direction of a conductor, he is tired of following the rules of someone else. He is eager to create his own rules, to create projects with others and to be part of the conceptual part too. Raúl looks at you with wide eyes when he speaks, even though the thick glasses make his eyes look small. He has a very refreshing and honest way of interacting with others. Never intimidated to ask again, when he does not understand something.

As we enter the elevator to go to the 18thfloor, I ask them, if they have already thought about what they want to do for their project at McaM. Raúl explains, that they have purposely not thought about a specific format yet. They did not want to focus on that during the first days, to encourage open thinking. They felt, that the previous days have been very conceptual, and they wanted to break free from that. However, they have agreed on the fact, that they would like to build something. The lift door opens and we step into the first gallery of many. We stumble from frame to frame, from canvas to canvas and from sculpture to sculpture. They talk about materials, surfaces, compositions, tools and speculate about the artists intentions. Sometimes they wonder and leave the white cube gallery puzzled.