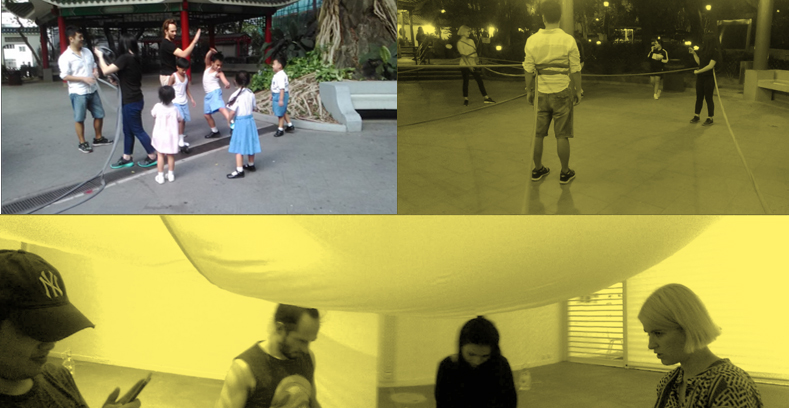 Sketch for a start

After the experiment on ABC Human connection, the group began to combine all the interesting responses and transformed the final performance into an interactive piece that can only be complete with the present of audiences.

The work started with sketches and talks of childhood memory.

Like a child inventing games to play with new friends, we searched for simple touch to bridge people, finding what appeared to be the most gentle and easiest way to start connection, and set our foots in the playfulness of Hong Kong.

We had the idea of having the performance in Clockenflap, a music festival that we can involve as many audience we can. The idea soon adjusted as we realized perhaps it would also be interesting to develop the experiment first in Connecting  Space where we were able to control the situation. Somehow these two phrases became the major key words of the performance. We had our meeting under the blanket, and prepared the tryout performance of the rope in park with elementary school children. How a child play with flashlight under the blanket in the middle of the night, telling stories to their siblings or friends? How exactly did we play? Hong Kong was the tireless energy that pushed and embraced us. There were moments when the energy seemed to be overwhelming, suffocating even like a blanket on the face, strangling like a robe on the chest. Still there were also moments of pure naïve, and Hong Kong gave you whole freedom to play. The contradiction of city as a playground or a gigantic concrete jungle are the two contradictions we began to rationalize in the performance, and a crucial dynamic for us to come around. Installation, projection, all the visible and the invisible.

Up to the final two weeks, we had the general idea of how to play with the robe and the blanket. The problems now are: How shall we start? What comes first? Will the changes interfere with our objectivity?  These were the question concerned us the most, and soon turned to the biggest barrier to cross.

To overcome the situation, we started with installing the blanket on the ceiling, adjusting the light, trying the rope with various approach, directing projection and music, and figuring out a ultimate form that was convincing enough for the group to reason with. A Challenging collaboration that brings pepper to the work

Due to different personality, age, experience, discipline, interest on topics, the collaboration went on to a bumpy road, which means having fun and fight always had their part simultaneously during discussion and preparation stage. Our controversy continued to the last minute before the final performance, and it’s hard to say whether we had really settle with all the issue. Still, without doubt, we all learned and inspired from our work, and could be a starting point for future adventure.