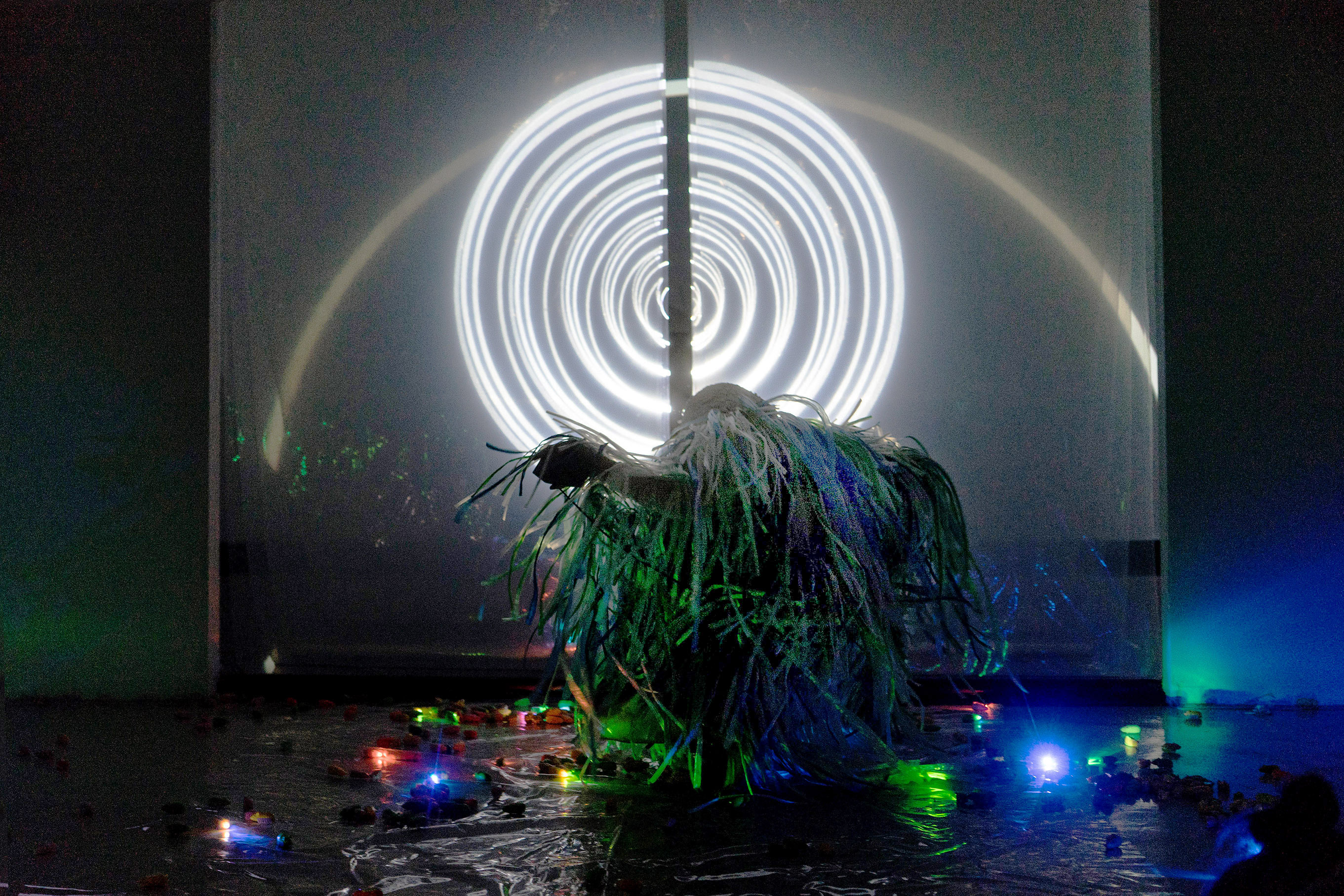 At the beginning the space itself, accessories, costumes and TV monitors are assumed to be installed, and give a hint to the main performance which will be followed. Just as temples and churches do, visitors are free to visit and feel the atmosphere of the space when the ceremony is not held yet.

The floor filled with water creates second images by reflecting the videos projected on the wall. Also, the tv screens which are connected to the camera mounted on the costume, displaying the visitor’s appearance and revealing the symbol of reflection.

Hamster balls which randomly circulate in space, projection graphics and music provide a clue of the ‘Future’ and ‘Cyborg’.

The curtains which separate the space into two parts create an overall atmosphere. PVC curtains function as the multi-layer screen so that the projection looks blurred or unclear. Also, the separation makes the backside with water to be more closed compared to the front part.

Part 1: Guardians of the A.I. temple.

Breaking down clean distinctions between organism and machine, human and animal, civilised and primitive, whole and part, man and woman, physical and the non-physical.

Our best machines are made of sunshine; they are all light and clean because, they are made of nothing but signals, electromagnetic waves, a section of a spectrum

The first part of the performance shows regulation, rules, stability, and balance. 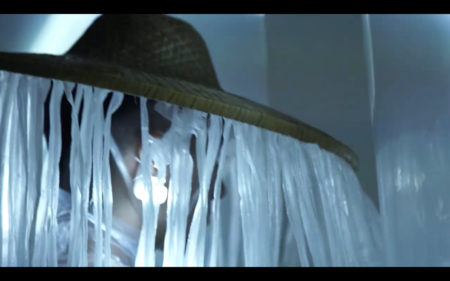 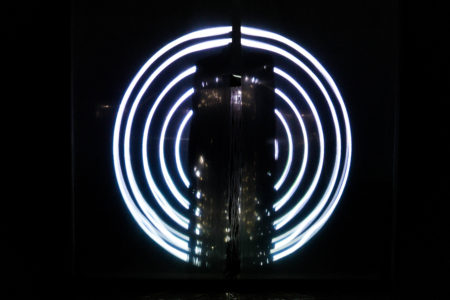 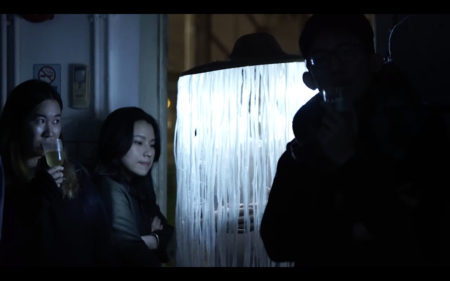 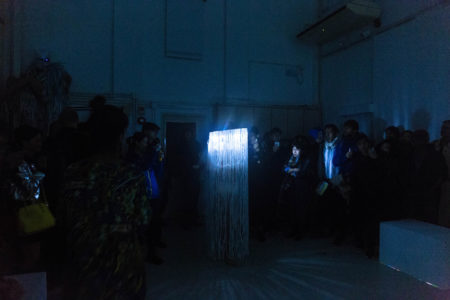 Straight and semicircular graphics projected onto the walls and water filled floors are deliberately designed to reveal the finished shape through the reflection. Three performers start the initial ceremony in A.I temple. The performers can be described as the guardians of this temple and ceremony. They are hidden or unknown beings located behind layers of layers. Their movements are symmetric, synchronised and repetitive. However, the movements and the graphics, which seem to be repetitive at first glance, gradually accumulate meaning by amplifying the sound. The performance itself has a minimalist structure but it has been filled with the bass and background sound with overwhelming volume. As the rhythm and the volume of background sound change, the mood grows, and geometrical graphics are cracked or changed as the PVC layer unfolds.

Two forms point one on the other, they are staring at each other crossing the selves.

Though both are bound in the spiral dance, I would rather be a cyborg than a goddess.

While the ceremony starts in the back space and the audience is waiting in the front, they hear already a loud noise coming from to white boxes on the floor. Additionally two guardians with deformed eagle and wolf mask are waiting for their part. A wifi-camera attached to each of their heads show via two mounted screens the procedure from another view. It is a repetition of the mirror situation produced in watered layer on the ground of the backspace, going through the digital networks of invisibility: observing the observing. Slowly they descend from their platforms consisting of the every-day installations of a kitchen which is originally part of the room. 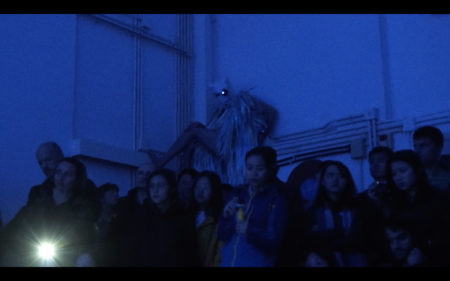 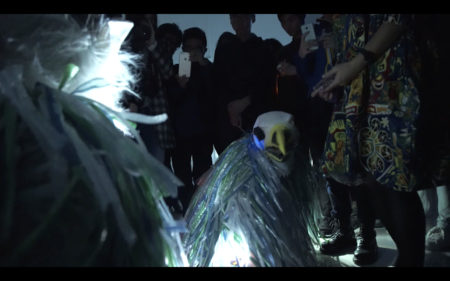 They don’t symbolise animals, nor are they human. They stand for the liminal space and time where things are not graspable anymore, they are creatures of fiction, of mutated desires. With blinking lights and audio feedbacks – produced with recorders and speakers – they move through the audience, accelerate the affective forces of movement and touching, the visual and the sonic.

With the end of the crescendo of the ceremony the two creatures lift the white boxes where the audience can see about 500 toy mice. some of the already lost their energy, others are still moving around enlightening the floor with LED-lights. A voice-over starts with a reshuffled version of Doll Yokos Ghostmanifesto.

once again, it’s the future that’s being sacrificed …”

Meanwhile the two creatures continue to explore their embodiment in connection with each other, the mice and the audience. Till they open the entrance door of the temple do expand their explorations. This is an important moment since it is diffusing the traditional performance space as it sets a vague end point of the performance. The two creatures get in contact with people which were never part of the ceremony in the temple. 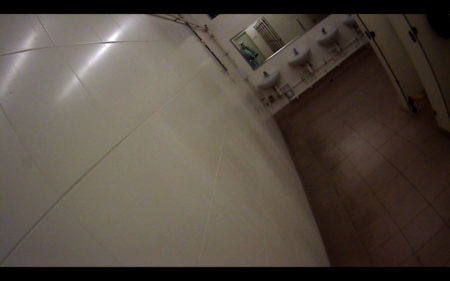 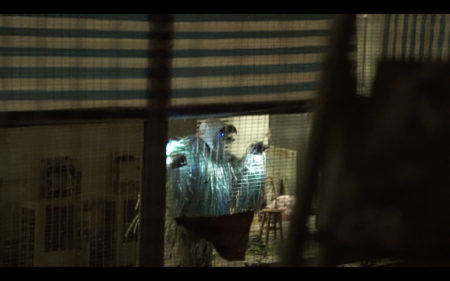