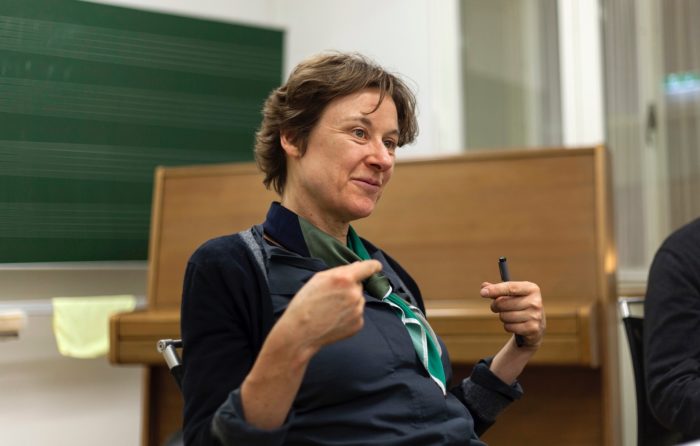 Until the end of the 20th century the idea of the music of the avant-garde was to define its development by continuously further differentiate itself. The music was focussed on its own rules, its abstraction, its purity.

Nowadays the “music of the avant-garde” does not exist anymore. Instead there are individual works and positions, that define their own framework and follow specific questions. As a result every piece of music needs to ask about its inside and outside. What is the own, thus the pure, and what’s the alien? With each inter- or transdisciplinary work, we encounter these questions, but also with every artistic reference to a topic outside the arts. Based on her own work, Isabel Mundry will describe, how musical articulations and extra-musical references are getting connected. Her main topics will be public spaces and transitions between art and nature.

Isabel Mundry was born in Schlüchtern (Hesse, Germany), raised in West Berlin. Studies composition with Frank-Michael Beyer, Gösta Neuwirth and Hans Zender at the „Universität der Künste Berlin“ and the „Hochschule für Musik und Theater Frankfurt“. She also takes courses in musicology (with Carl Dahlhaus), art history and philosophy at the “Technische Universität Berlin”. 1992-1994 stay in Paris: first with a scholarship from the “Cité des Arts“ and later at IRCAM (as part of a one-year course in information technology and composition). 1996-2004 Professor of composition at the “Hochschule für Musik und Theater Frankfurt”. 2002/03 Fellowship of the “Wissenschaftskolleg Berlin”. Since 2004 Professor of composition at the Zurich University of the Arts. Since 2012 also Professor of composition at the University of Music and Performing Arts Munich. Teaches amongst others at Takefu Festival (Japan), Tong Yong Festival (Korea), Darmstädter Ferienkurse and Boston Goethe Institute. Numerous awards and grants, including the Kranichstein Music Award, VR Leasing Award of the “Ingrid zu Solms” Foundation, Advancement Award of the Ernst-von Siemens-Foundation and the “German Composers’ Amard of the GEMA” in the category Solo Concerto. Member of the Academies of Arts in Berlin and Munich. Performances of her pieces for example by the Chicago Symphony Orchestra, Philharmonisches Orchester Berlin, Wiener Philharmoniker, Arditti-Quartet oder Ensemble Intercontemporain, conducted, by Daniel Barenboim, Suzanna Mälkki or Pierre Boulez.