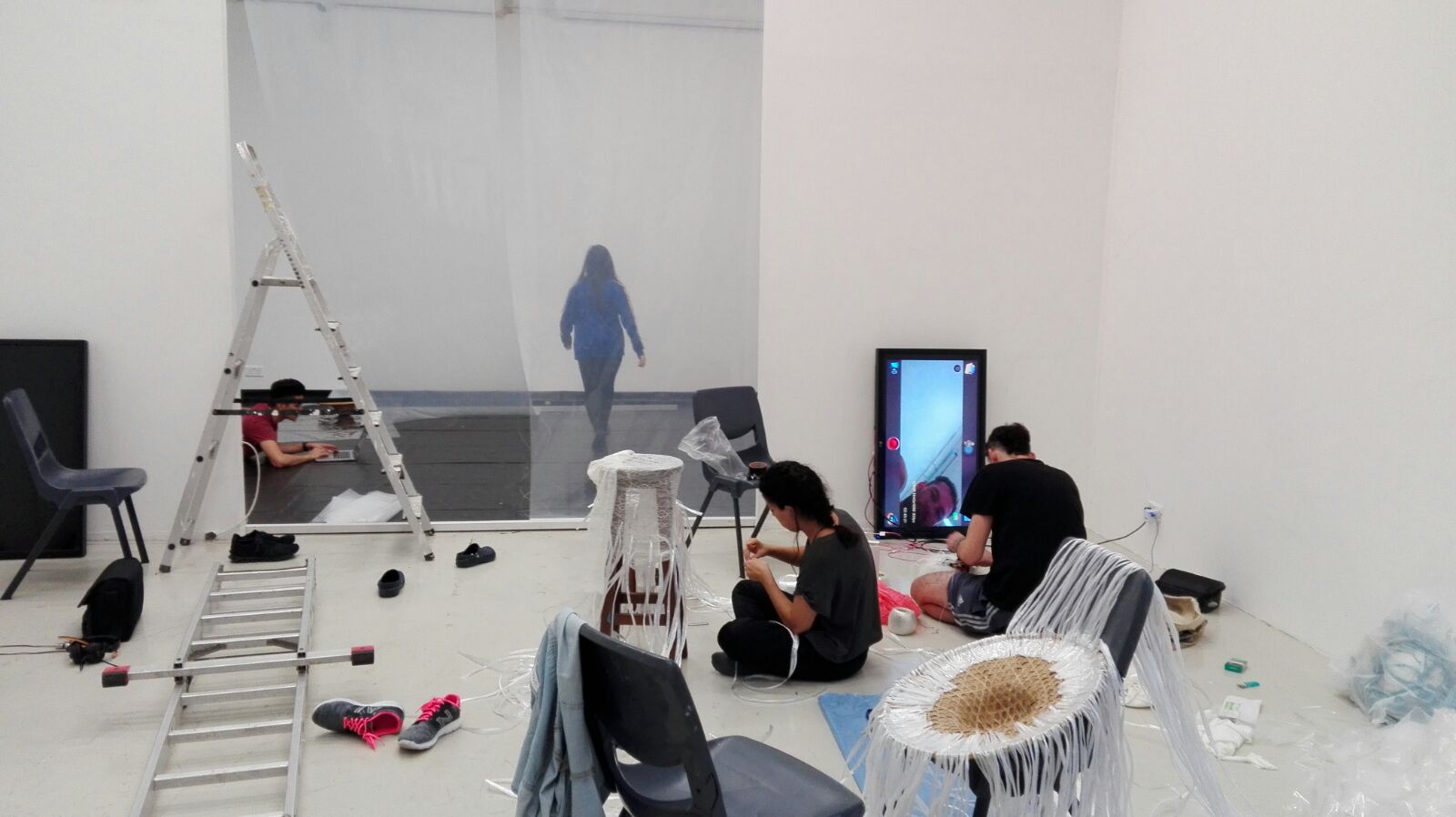 The working and performing space was divided for each inner group constellations to explore the idea of an A.I. Temple.

Planning construction and space
The partition of the two walls in the room led us to separate the room into two parts. We decided to design the posterior room a space for ‘reflection’. To utilise all four walls and the floor as either a mirror or reflecting plate, we built 5 layers of pvc curtain in between the two partition wall. Also we spread black waterproof pvc on the floor to fill the water on it so that the water could reflect the light and projection.

Projection & PVC layer
Before hang the pvc layers on the wall, we explored projecting different types of graphics and light sources on the material. To exaggerate the dramatic effects of layering pvc, we ended up making symmetrical and geometric configuration of graphic which would be projected on the layers.

Costume
We got inspired by raincoat as a second skin and bamboo hat.
We developed costume into a certain form, which is effective to use our costume as a method of 3rd reflection. We connected white plastic strings to bamboo hat so that the strings could reflect graphics and lights from the beamer. The outfit also gives a sense of ambiguity that audience would not easily define who the performers are or what the performers represent. Plastic strings which is hung vertically address a contrast compare to the movement of performer glide horizontally on the floor.

Sound
We decided to place speaker sets in the middle of the back wall including a big woofer. Sound was the most important element of the performance since the change of rhythm lead the flow of performance. Mystique notes blended with loud and low frequency sound. As the rhythm goes faster and faster, and the volume becomes bigger and bigger, the performance of posterior part reaches its peak. The sound stops all of a sudden, giving a moment to take breath to the audiences and let them focus more about the scene happening in the frontal area.

Indoors and outdoors laboratory of improvisation and development based on the following references:

From this research the following elements appeared, were tested and discarded or integrated:

Animal totems: Use of fabrics, plastics, animal masks and costumes which allow different morphologies to embody a mix of genders, race, class and humanoids with “nonhuman animals”.

Direct interaction with the viewers/participants: to explore an involving situation and to play with the conventional performative division between performers and audience.

During several mentoring sessions differences according to approaches and interests within the group continued to appear. Additionally the group experienced discomfort while supervisions, but was later benefited from bilateral mentorings. During these sessions,  decisions were made like the usage of screens instead of light projectors in the front space of the future performance; or a setting of the space as clear as possible for the movement improvisations and interactions, which would deal with inner and outer spaces of the traditionally framed stage. So the improvisation was also decided to have an open ending.