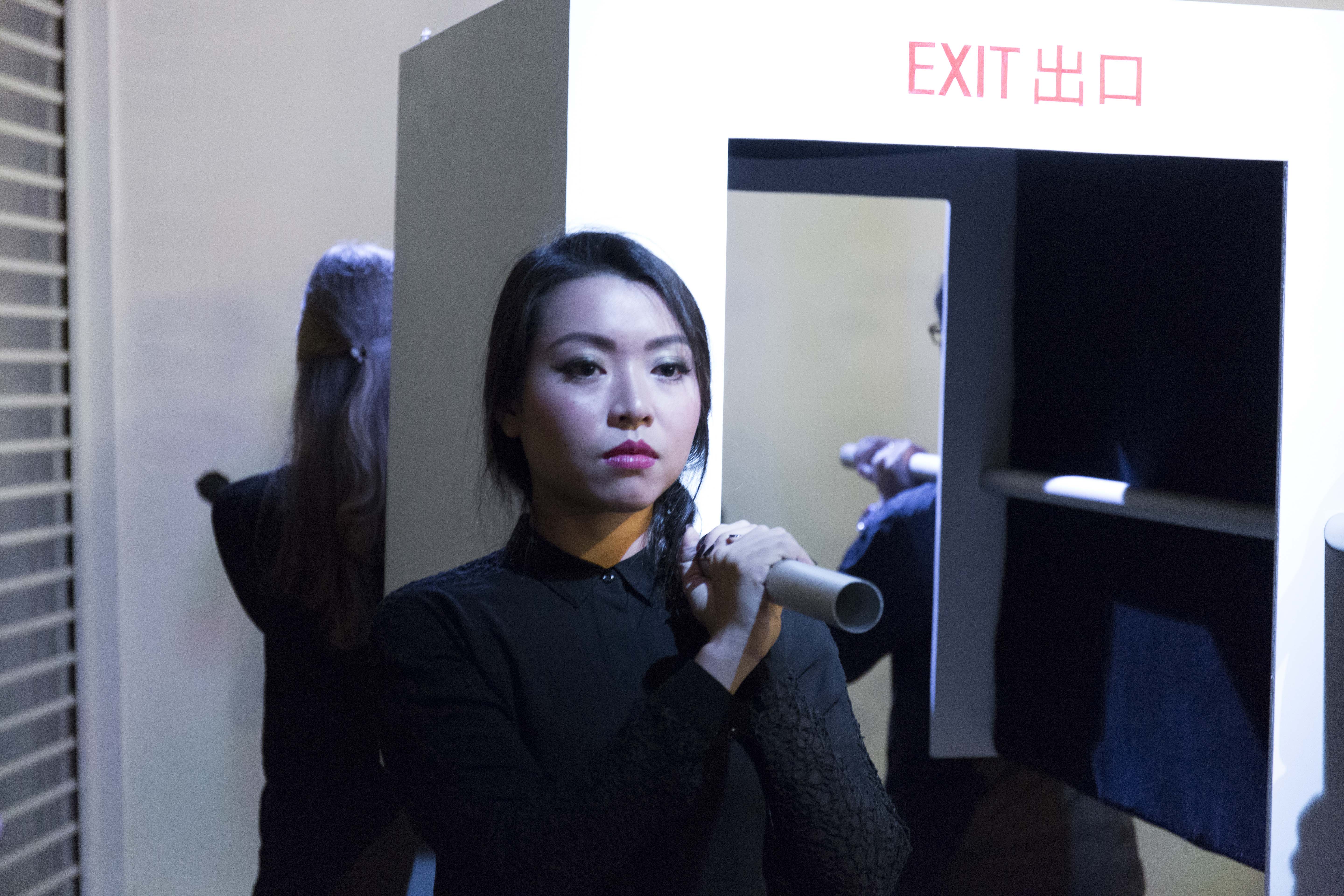 Being the result of a very harmonious group of four, the cube was soon completed. A minimalistic white box with carrying handles, resembling a litter for transporting royalty, stood there ready to be used. The interior was coated with a sound-absorbing material, covered in black velvet. Roughly one cubic meter of black and white silence.

As we agreed on creating a piece that deals with noise cancelling and censorship, we were soon very pleased with our product. The effect when walking through was striking enough for passers-by to notice, so it was ready to be tested in the bustling city of Hong Kong. We took THE BUBBLE to several places to test the interaction with people on the street. To Kai Tak, around the Central area and the performance street in Mong Kok, all of which was documented on video. Our audience were then asked how they experienced this silence, what it meant to them in the busy city and if they thought that silence was important. The reactions we got were mostly positive, with people agreeing that such a bubble was a very welcome object in Hong Kong. We were asked what organisation we belonged to and if we had thought of permanently installing our box in the shoe-shining street in Central, so customers could enjoy a moment of peace and quiet while having their shoes polished.

After a following mentoring meeting we realised that all this time we had been mainly focusing on one aspect of the noise cancelling effect: the pleasant effect of having a moment of peace and quiet. We thus wanted to find a way to include other aspects such as the luxury of silence, the power to silence and the burden of all this into our piece. Two days before the presentation we decided to abandon the idea of creating an installation and not to use the vast amounts of video material we gathered. This way, we could do a performance that could potentially include all these aforementioned aspects of silencing while taking into account the different ideas of group members. The performance at Connecting Space lasted for approximately 30 minutes and was choreographed loosely, to be able to interact with the audience. For this, we had a number of black cube-shaped speakers that were suspended in the space. For the first part of the performance, they played randomly arranged noises we recorded in Hong Kong, which created a chaotic but familiar noisescape in the room. During this time the four of us carried the white box motionlessly, while the audience could freely pass through it. After a certain period of time, people were invited to take our place and feel the weight of the silencing box. We did not give any further instructions in order to see if and when the burden is passed on to the next person. While the audience took over from us, we switched the speakers to white noise, the most pure form of noise, where all frequencies are equally represented. This created an annoying atmosphere, in which the noise-cancelling qualities of the Bubble became very evident. After finally taking back the weight from the audience and putting down the box, we switched off the speakers and exited the room towards the inside, where the performance of the Oolong-group started shortly after.