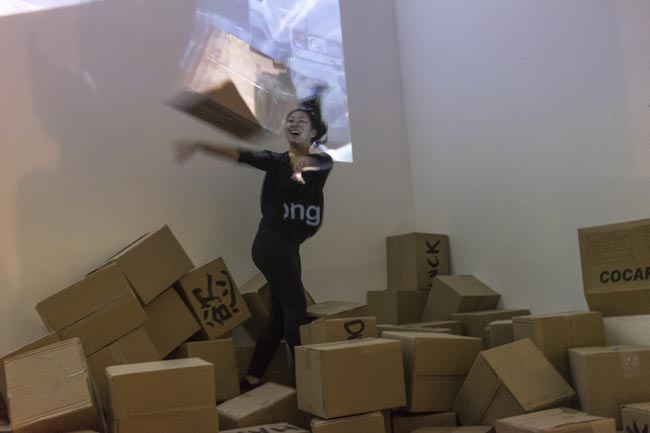 After having formed a groupf, there were a diverse of issues that could have been dealt with in the project. The four of the students: Kuo Ying Hsiu, Andreas, Lukas Mayer, Yang Liu and Mbene Mwambene settled on to tackle garbage. Not only was this enough but a form had to be decided too. The presentation would be documentary performance. We would show raw data, calculated data, images, videos, installation and most importantly theatre dance performance.
Hong Kong is populated by 7.2 Million people making it one of the densely poluted places on earth. The consumer power is astronomically highly hence a clear problematic waste problem. Needless to say, space is a challenge but where would the waste finally rest?

Of 7.2 million people, there 9,700 blue overalled men and women who clean
the city. they are at the bottom of garbage pyramid and represent 0.14291% of
the Hong Kong population. These people are hired by private companies
which are contracted by the government. Every two years most of the staff
contracts come to an end.
Some were once rich. They were in the middle of society. They lost everything,
and became outsiders. Wanted revenge and finally get punished daily. They are
the wasted in the waste society.
During the research, interviews in different garbage collecting centers were
conducted. Hence the result will be a documentary performance modeled on
Greek myth of Prometheus. The idea is to interrogate the plight of city`s
cleaners.

The telling of the story

We decided to show the most famous elements of the Prometheuy Myth in a reverse chronology. Starting with the Titan shackled on a rock in front of Hong Kong and usind biografies of the cleaners to give a personality to Prometheus.

The audience saw the getaway from the Mount-Olymp, the conflict between the brothers Epimetheus (afterthinker) and Proemetheus (forthinker), all evil getting out of the box of Pandora.

The final station was a dialogue between the Oceanids and Prometheus about Prometheus wish to emancipate humanity giving them the fire.

Weeks of discussions and rehearsals were undertaken. The prime objective
was to ascertain a crystal aesthetic parallelity between prometheous and the
cleaners. And mostly importantly to concretise relations between cleaners and
cleansers, cleaners, and society, cleaners and consumer power and cleaners to
the environment.
Parallel to that was work on stage and installation spaces. We would design a
moving world , “a parcours”,

Raw videos, a garbage space, garbage, cleaners, the audience and performers
were all part of the presentation. Apart form merely watching , the audience
were given audacity to experience, watch, walk through and dodge or interact
with the garbage.