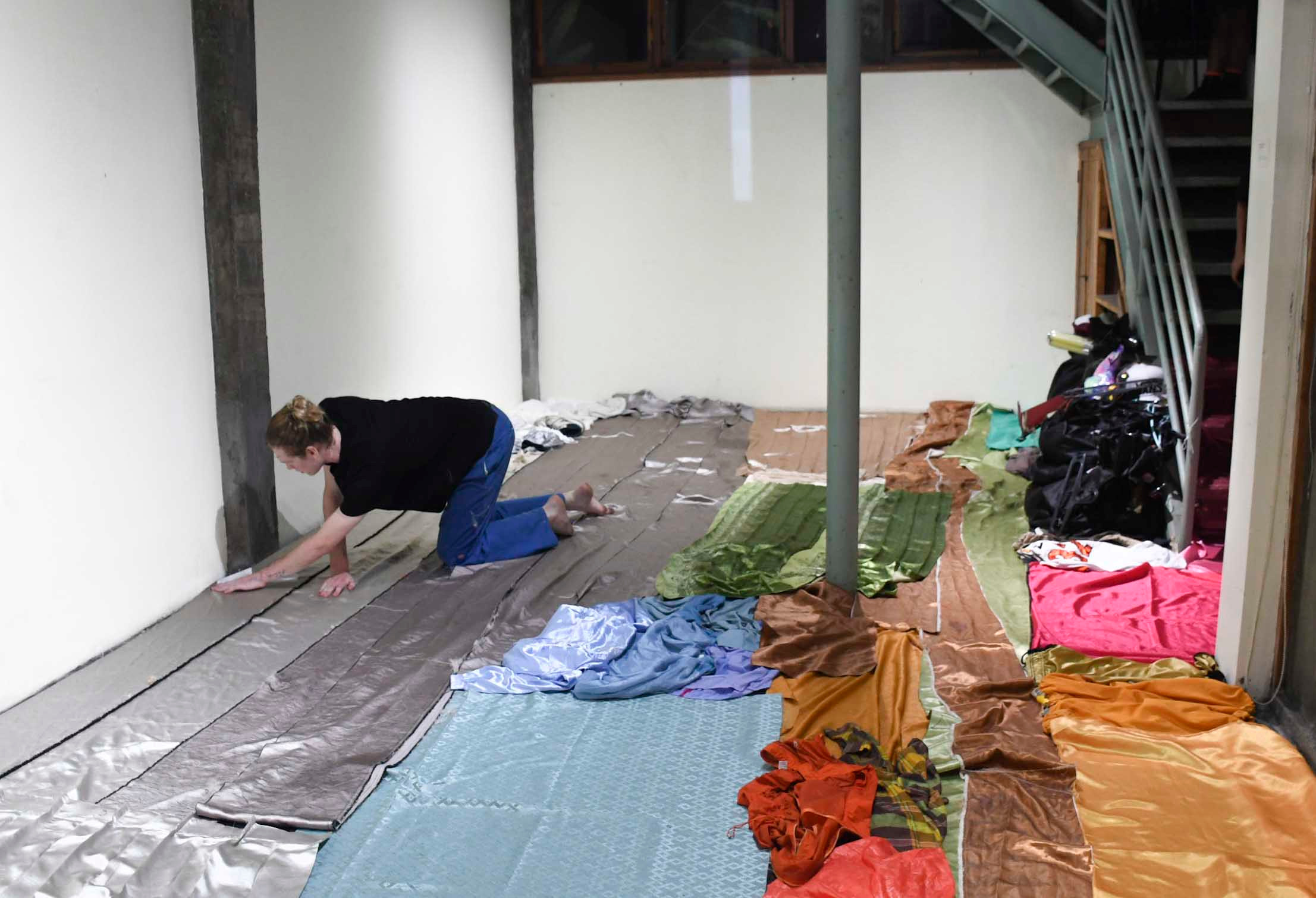 The durational performance “When things don’t come together” explores the meaning of collaboration when the team falls apart, somebody is missing, the plans that were made seem impossible and the only things that remain are fragments of work that do not want to fit together: A research, different materials, images, a figure with a language of movements.

The performance consists different elements which were found and developed during the working process. As the different elements are gonna be laid out, moved and put together new, there is a constant negotiation of how the elements could possibly work together and at what point they begin to enter into a dialogue. It’s about engaging with what is and finding a way to deal with it – a basis from which to make something congruent with the original project in a short time. A reflection on our TC time. All the elements are connected through the reference to the Arowana fish. An ornamental fish that sells for top prices based on how it looks, what color it is, how big the eyes are, how the fins fall. If a fish does not fit the beauty standards, there are operations that can be easily done at home (diy). A whole system of relationship between human and animal is visible in the example of the Arowana fish. Starting with a value system based on appearance and color, a very male dominated scene or crimes from theft, smuggling to murder. And it all starts with the human belief that the fish brings luck and prosperity.

The process of this work begun after the end (or failure) of the actual project. After my team partner left the program a week before the exhibition, I was my own group. We had big plans from the beginning, which meant continuing to work on our original idea alone didn’t work. So I was on my own with all the things we collected over the last weeks: Textiles, motorcycle parts, mirrors, tools, decoration materials, etc. What was I supposed to do now? I had no experience working with textiles or sculpting.

Should I continue working with the objects I already had or start from scratch? I did both and decided on the advice of my lecturers for the former. I think it would have been kind of a waste to put the found objects aside. Much of our work, our thoughts were already in them, but without being visible to an audience. This ambiguity is what Dimitri de Perrot, one of the lecturers, probably have meant when he described the arrangement as poetic. It was a display of all the materials we had collected laid out neatly. They almost filled a room by themselves. Things that have nothing to do with each other next to each other, but which were supposed to become the basis for a coherent work of art. But what Dimitri also meant, was how I walk up and down in this room full of objects, trying to sort things according to some logical order: Tidying up and taking stock, but at the same time discovering and reminiscing, both good and bad memories. And with that, we had the score of the performance. I tidy up, sort, clear the air according to simple rules: Put everything in a pile, hang everything up, lay everything out flat, sort by color. Looking back, I would see the work as a reaction to what happened. How to deal with a work that just doesn’t want to work or, well, failed.