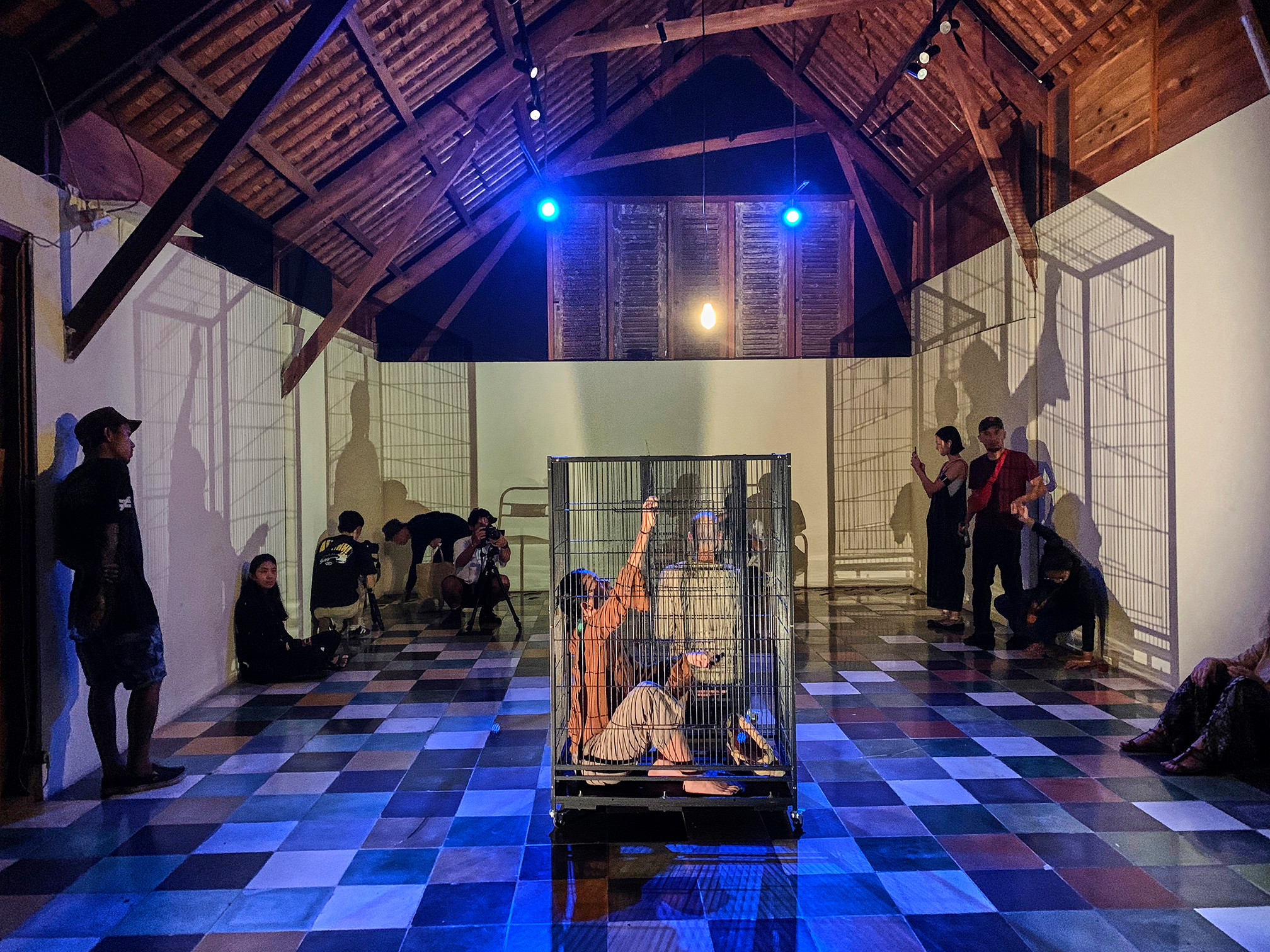 Our performance was based highly on trust and understanding, and we decided to take some risks. Our references were mostly performance artists such as Anne Imhof, Bill Viola, Guoqiang Tsai, Marina Abramović, and Tehching Hsieh. We agreed that the piece should include a certain extent of interaction with the audience and be presented in a fine art context. Without a plot, there would certainly be some surprises, and the right attitude to face them was to improvise within our roles. With rigorous concentration, exhaustion of the physical body, and deprivation of verbal communication, we tried out different things within three hours.

Following the concept of “ichi-go ichi-e”, we decided to live the moments onstage to the fullest, like a transient firework. Everyone brought some items to the performance to surprise each other, spice up the experience, and make it playful.

Teck, the god-like observer (some said he represents time) came with a bag of glittered dry leaves (which were sprayed with fresh natural looking green & gold on one side). With his black outfit, he persistently tried to place all his leaves with the unsprayed side facing up during the first half of the performance until the whole floor was covered, before he got started flipping the leaves to the glittered green side midway through the performance. However, after Shao got released from the cage, her act of continuously running in a circle disrupted Teck’s arrangement. She had a bag of cheap sparklers that were hard to ignite. Since her fire never lasted long, she kept trying to light up more sparklers, a paper bag, and even leaves and provided them to Alex, the third performer kept in the cage, as an act of showing love or trying to communicate. Also, a persistent figure, Alex, hid a metal chain behind the wall and used its shaved head as a pencil to draw on the white wall with charcoal. The spinnings of its head then left some entangled, curvy lines on the wall, as if a complicated relationship.

Originally, we imagined cages as a symbol of life or our confined thoughts. The two figures stuck in the cages were not able to touch each other physically nor emotionally-wise but kept trying to get out of the cages and communicate with each other in their stubborn ways, while Teck was mainly watching and doing his own thing in a meditative way. This performance shows how we understood the difficulties in all kinds of relationships, and it is shown in a melancholic and poetic way.

The finale of the performance was met with an unplanned memorable situation. As if imitating or metaphorizing life or relationship in some sense, a cat went into the cage candidly just as the performance was ending. The cat was released almost immediately by an audience member who was immersed in the performance and decided to take action to free our mystery collaborator.

As a start, the group members presented their interests and research in turns and tried to narrow them down to some common grounds. We used different collaboration methods such as minutes keeping, moderation, checking in on the members, using games to understand one another, engaging in movement and kinesthetic activities such as massages and theater role-playing games, and writing collaboratively to express our feelings. In an organic way, we came up with the ideal topic of delving into the theme of producing a “relationship” themed performance.

The idea of using the cage as the main prop was conceived after a trip to the local animal market. We all agree it could be a canvas or material we could use to explore and experiment with. With two cages bought and a third member working remotely, the exploration began. We conducted several experiments, setting some rules before each durational rehearsal. The permutation of ideas and structure change as we reflect on the work we did.

After the mentoring a week before the final performance, due to the pressure of time and our emotional loading, we made a radical decision- doing no more rehearsals, separating ourselves, and performing just for once. This is related to the Japanese concept of “ichi-go ichi-e”, which is about treasuring the unrepeatable nature of a moment. Before we separated, we set out some rules according to our roles and relationships, decided on the clothes, lighting, and sounds, then went on a 6-hour-long trip led by 3 members in turns, without verbal communication. After the trip, we had a farewell dinner and worked completely separately for 3 days. In this period, we developed our roles, props, and body movements individually. In the end, despite all the uncertainties, we encountered each other and lived together for 3 hours onstage.